Recently I wanted to use a horizontal navigation menu on a website. I wanted the items in the menu to be evenly distributed across the width of the page, but also butting up against each other, with no space between each item. The other requirement was that the spacing between the text of each item should be equal.

Fluid width menu with justified items, each one with the same padding applied

I asked on the sitepoint forums whether this would be possible with CSS, given that the number of items in the menu is unknown, and the width of the text for each item and the menu itself is also unknown. The answer was that it may be possible with flex-box, but really it would require javascript for a cross browser solution.

So I decided to use table display with a fixed table layout for the base CSS. Then I worked on the javascript to lay out the menu in a justified fashion.

On the sitepoint forum thread it was mentioned that this was a repeated request, so I thought I’d put a bit of work in, and try to write a justify javascript function that could be used as a universal solution. To this end I’ve written an example page with menus styled using various CSS methods, and also the ability to apply the justify menu javascript.

I’ve structured the menus using the standard unordered list method. I’ve also included submenus under option one and option four. I couldn’t get the submenus to display properly in IE7, so I have used a conditional comment to keep them hidden in IE 7 and below.

The length of the text for each item varies so you can see how the menus look.

For all the menus I’ve applied a black background to the ul. You wouldn’t want to do this in real usage, but helps make clear the relation between the list items and the ul for the purposes of the example.

The first few examples show the menu with the following css:

This lays out the menu like a table, with each column the same width. Table layout is not supported on IE7 and lower.

Unfortunately, if you have a long menu entry, then that entry will be wrapped onto multiple lines. This can cause issues, as that one menu item becomes taller than the other items.

To get round this, I have applied the CSS rule of white-space: nowrap to the anchors. This prevents the text wrapping, however this does mean that the long text will get cut off when the menu is forced to a small size. 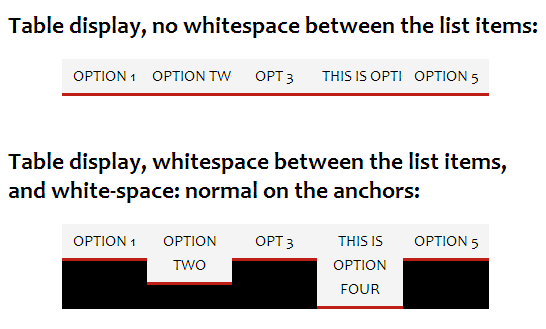 Next up, we have another menu with table display, but table-layout: auto;. This makes each ‘column’ of the ‘table’ adjust to the size of its contents, rather than making each column the same width.

The issue with this method of display (at least for me), is that the larger menu items have more ‘padding’ applied to them than the smaller menu items.

Another issue is that when a sub menu is shown, it will expand the width of the parent list item. (I must admit, I’m not sure why this happens?)

Table display with auto layout when a sub menu is displayed.

This can be resolved by using absolute positioning on the sub menus, but then you can end up with sub menus that are smaller in width than their parents (which looks strange to me).

Underneath that, we have a couple of examples of a fixed table layout menu with padding applied. The purpose of these is mainly to see how they are affected by the javascript solution.

The basics of the flex CSS method are:

display: flex;
sets the ul up as a flex container.
flex-direction: row;
says that we want the children (list items) laid out horizontally in a row.
flex-wrap: nowrap;
stops the items wrapping onto a new row when the menu width is small

On the list items we set flex-grow: 1;, this is what makes the list items automatically stretch to fill up the menu width. Unlike table display with auto layout, flex adds the same amount of ‘padding’ to each list item.

A very good description of the flex layout can be found at CSS-tricks – A Complete Guide to Flexbox.

However, Flex works differently in IE10 than how it does in Chrome and Firefox. In IE10 the menu is displayed with each item having the same width, the same as a fixed layout table display. I haven’t tried the IE11 preview, so I’m not sure how IE11 will treat Flex display.

Menu with flex display in IE10

This method was developed by CSS guru Paul O’B and posted in reply to my question over on the sitepoint forums. Unfortunately it needs a very specific way of writing the HTML for the menu, one that you are unlikely to come across in actual usage.

My examples are using the same HTML as the other examples, and so I was not able to replicate the effect. However, you will see that the anchors are justified (but have space around them).

The last example uses a fixed table layout again, but I have added separators between the items. The separators are just a pipe character | added as CSS generated content. You can use the same CSS to add separators to a flex layout.

Menu with dividers / separators added between the items

The :after pseudo class is not supported in IE7 and below, so this won’t work for that browser.

I developed a javascript solution that should hopefully work well to justify most horizontal menus.

It works by making the list items wrap to their contents. After doing this it can calculate how much spare space is left in the menu. Then this spare space is divided between the number of list items, and applied as padding to the anchors.

The javascript does not require jQuery. However, this does mean that it requires a couple of helper functions. These helper functions are only a few lines though, and will load a lot faster than a full js library like jQuery. If anyone has interest in a jQuery version of this function, please let me know.

Although the javascript mostly uses inline CSS for modifying the menu, there is one CSS rule that you must add to your stylesheet:

This rule is needed to prevent the unordered list container from collapsing. Because the javascript floats the list items, we need to clear the float after the last item, which is what this rule does.

However when margins are applied as well, the menu is not justified correctly. This is because the javascript cannot work out the width of the item when margins have been applied. If anyone knows of a way to get the width of an element including margins, I’d love to know!

I’ve heavily commented the javascript, so it should hopefully be easy for you to understand what it does and why. For production use you would probably want to run it through a minifier to at least get rid of all the excess whitespace and comments.

You can view the javascript by just viewing source on the example page, or see below:

As it is, the javascript doesn’t work in IE6. If you need IE6 support, it can be modified by setting the anchors’ display to inline and zoom to 1, e.g.

In the example above I am checking a variable IE to see if it is equal to 6. You will need to make sure this variable is set, as it is not some special variable automatically set by IE. In the example page I am using IE conditional comments to set the value of the IE variable to 6 (for IE6), 7 (for IE7), or false for all other browsers.

You will also need to modify the parts where the original inline css styles are saved and restored. Otherwise when the window is resized to the minwidth, the inline display will still be applied to the anchors.

If you have any comments or suggestions (I’m sure improvements could be made), please leave a comment below or you can email me on info@.